Today is the start of Brain Awareness Week, and I am super stoked.  In honor of this holiest of holy weeks (from my perspective, anyway), I've decided to do a series of posts on my favorite brain phenomena- the stuff I've learned about over the years that makes me go "Whoa, that's so freaking cool".  First up- hemi-neglect.

To understand what's happening in hemi-neglect, you need to understand a little bit about how the visual system works (also, as a visual neuroscientist, I just want to talk a little bit about how the visual system works).  Light reflected off of objects hits our retinas at the back of our eyes, and cells there turn the photons from the light into electrical signals.  These signals are passed from the retina to a structure called the lateral geniculate nucleus along the optic nerve.  The LGN is basically like a relay station, and sends the signal to the primary visual cortex, which specializes in gathering information about basic features of the image- where it is, orientation, how bright it is. That information gets passed to other areas of the visual system that specialize in detecting edges, processing color or motion, and recognizing objects and faces.  It's not a perfect hierarchy, though, and some signals skip earlier areas and go straight to later ones, and sometimes the later areas send signals back to earlier ones.  Other, non-visual parts of the brain also get involved, like areas that control attention or voluntary movements. 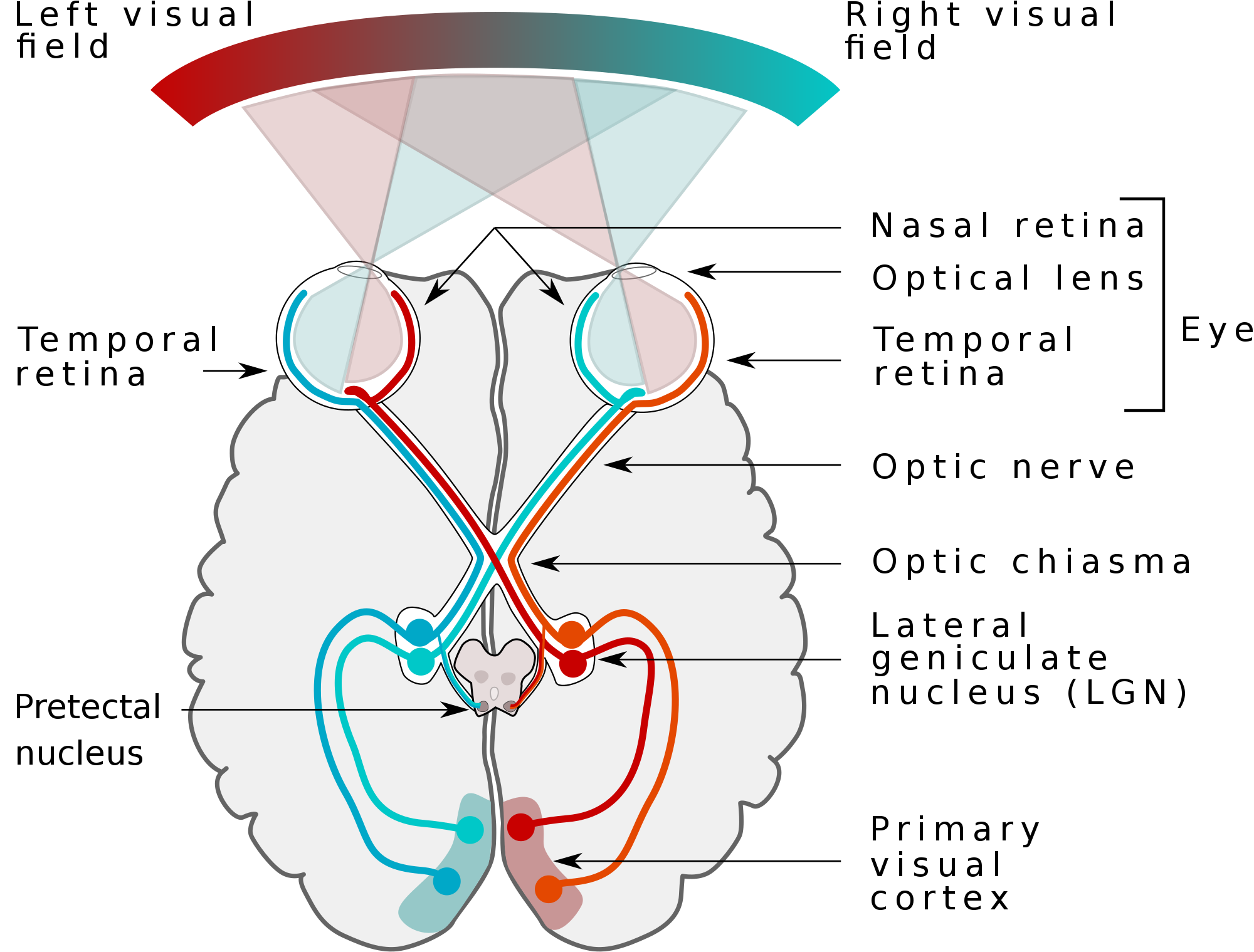 "Blindness" in the traditional sense is often caused by damage to eye or the optic nerve which keeps signals from even getting to your brain.  If there's damage to the cortex caused by a stroke or disconnecting one hemisphere of the brain, however, those messages that get sent that skip around the damaged areas and go straight to other parts of the network.  This can lead to your brain knowing there are objects in your visual field, but you not being consciously aware of them.  Essentially your brain knows something you don't.

Hemineglect has different forms, determined by what the reference point of the neglect is and the range of the neglect.  In some cases, the person is their own reference point, and they're not aware of anything that happens in the left half of the world as they're looking at it.  They're not aware of people sitting next to them on that side, have a tendency to walk into walls and doorways on one side of their body, and if you moved a pencil in front of them at the optometrist, it would disappear as soon as it crossed in front of their nose.  In some cases, every object is it's own reference point.  People suffering from this type of neglect will not be consciously aware of half of every object in front of them. Put a dinner plate in front of them, and they'll only eat food on one side of it.  In some really crazy cases, people will neglect one side of an object even though it's on the right side- ignoring Asia on a flipped map, for example, because they know that it's supposed to be on the left.  It's not just about seeing, though; often people will demonstrate the same type of inattention in drawing a clock, only including numbers 12-6.  If you ask a patient with hemineglect to imagine they're standing at a certain location in a place they've been and describe what they see, they'll leave out all the things on one side.  If you ask them to imagine they're standing directly opposite of the first location, they'll describe all the things they didn't include the first time, and not be aware of anything they did already include.  Sometimes this will apply to all objects in view, sometimes only to objects within arm's reach, objects that they're capable of interacting with. I said that hemineglect is your brain knowing something you don't, because even though the patient isn't consciously aware of something in that location, they might still respond or interact with it, and have no idea why.  They might step out of the way of an object while walking, even though they don't know why they did that.  If you write something like "animal" on a paper in the neglected hemisphere and then ask the person to name some words that start with the letter "B", they'll be more likely to name animals, even though they don't know that there's even a word there.  In the end, it's not really a question of being able to see, because the brain is seeing stuff, but a question of being consciously aware of things, which makes it an interesting question for people interested in consciousness.

Hemineglect is most often caused by strokes that damage tissue in the parietal cortex.  For a long time, the theory was that it was due not all of the tissue being damaged and signals jumping between tiny islands of healthy tissue left in the visual cortex.  However, you can see the same types of deficits in patients that have had entire hemispheres of their brain removed, so there's definitely no healthy tissue islands left.  There's really not a single mechanism that can account for all the different forms of hemineglect, so in reality, it's probably a cluster of different things that we've grouped together because they all involve being unaware of one side of something, but either way, it tells us some really amazing things about how our brains work.

Keep up with the rest of my Brain Awareness Week posts to learn about more fun brain phenomena!  Follow me on Twitter for more science stories and conversations and Facebook to keep up with all my posts.
Posted by Tori at 2:03 PM