Remember Your Humanity, Forget the Rest

I was planning on going to the March for Science today, but I live in Minneapolis, where both the March and Spring have been canceled due to the forecasted foot of snow.  Instead, I am inside at my desk with a London Fog latte writing about marching where it is warm and my chances of skidding to an icy death are far lower. 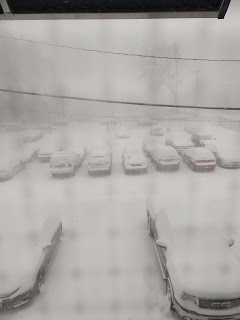 View from my apartment.  In April.

Over the past year, there have been many pieces written about the concept of the March for Science: what the goals are,1 why people will or will not be marching,2 controversies surrounding the organizers and organization,3 and the outcomes and efficacy of the first March.4,5  There have been many complaints that science is apolitical, and therefore political protest is irrelevant or unwise.  This idea has already been thoroughly debunked when you consider that science is dependent on government funding, and that funding is determined by politicians;6 that who science is done on has a long history of targeting politically and economically disenfranchised groups;7 that the government has the ability to make decisions about scientific questions that should not be studied;8 and that many rejections of scientific truths often stem from threats to underlying political beliefs.9  This is not to say that science SHOULD be political, but that for hundreds of years, it has been, and that's not going to change.  There is another contigent that argues that scientists should be apolitical, at least in their capacity as scientists.10  This idea is based on the concept that a vocal political agenda will introduce perceived bias into scientists' work and damage credibility of the field as a whole.  People who make this argument often invoke an apolitical history of scientists, but that's just not a thing.  While the current scale of political involvement as demonstrated by the March for Science, the political action committee 314 Action, and an ever-increasing number of opinion and op-ed pieces is unprecedented, scientists have long been politically active, and to argue otherwise is disingenuous.

In the early days of science, it was primarily privately funded.  Scientists and scientific departments relied on patrons and donors to be able to complete their work, and many of the people making scientific and technological discoveries were not associated with universities and wouldn't consider themselves scientists.  Think about Benjamin Franklin, Gregor Mendel, and William Herschel, the composer who discovered Uranus.  A big shift in how science was done and paid for occurred in tandem with the world wars; governments started funding scientific research for defense technology.11  In the early days of WWI, scientists in Europe began banding together to respond to en masse to political events.  Following the German army burning the library at the Katholieke Universiteit Leuven, eight prominent British scientists, wrote a letter in protest.  Ninety-three German scientists responded with a letter of support for the German army's actions.12  However, in 1919, the year following the end of WWI, the American Association for the Advancement of Sciences released a statement discouraging members from publicly expressing their opinions on political questions, and this seems to be where the idea that engaging in political discourse can compromise scientific objectivity really started.13

This apolitical scientific objectivity lasted until the 1930s, when scientists began to be troubled by fascism surfacing across Europe.  Many European scientists fled to the United States, sponsored and advocated for by scientists in America.  Scientists saw fascism as a threat to the free and open discourse that science rested on and recognized that many of the "scientific" arguments that fascist governments were making in an effort to turn the public against minority groups were, in fact, bullshit.  They held up the Soviet Union as a model for what the practice of science should look like: an "emphatic endorsement of science" from the country's leaders, scientific research funding as the largest line item in the country's budget, and socialized health care.  Threats to this model from the Nazi party in Germany helped to further galvanize scientists against fascism and set the stage for the future stronghold of communism in American universities.  The AAAS reversed their previous position on scientific involvement in politics, electing as its president Walter Cannon, a vocal socialist and anti-fascist.  On August 12, 1939, they hosted symposia and teach-ins for the public in 26 cities, with discussions on dispelling the pseudoscience that backed fascist attacks on minorities and the importance of democracy for science to flourish.  Famed anthropologist Franz Boas rallied strongly for scientist involvement in the politics of the day, founding the Committee for Intellectual Freedom, which had 10,000 scientist members.  He joined with 1,283 other scientists to issue a manifesto against racialism and fascism.  Boas commented that "The present outrages in Germany have made it all the more necessary for American scientists to take a firm anti-fascist stand... Our manifesto declares that we scientists have the moral obligation to educate the American people against all false and unscientific doctrines, such as the racial nonsense of the Nazis. The agents of fascism in this country are becoming more and more active, and we must join with all men of good will in defending democracy today if we are to avoid the fate of our colleagues in Germany, Austria and Italy."  This bubble of political activism burst in 1939, when the Soviet Union signed the Nazi-Soviet Pact, which led to the disenchantment and fracturing of American scientists' anti-fascist cause.14

The next major issue the roused scientists' activism occurred after atomic bombs were dropped on Hiroshima and Nagasaki.  Scientists once again became politically charged, this time against nuclear proliferation.  Physicists took the lead this time, particularly those involved in the development of the bomb, writing pamphlets and giving talks on the danger of nuclear weapons research and tests.  They created a non-technical research journal (side bar: we need more of these) to explain nuclear weapons and the threat the posed to scientists and the public called The Bulletin of Atomic Scientists.15  They traveled to Washington to lobby for the passage of bills for both international and domestic nuclear control.  Ironically, this anti-nuclear cause contributed to the overall receeding of scientists from visibly political life.  Outspoken scientists often found themselves on the problematic end of Senator McCarthy's communist probes and getting blackballed from academic jobs.16

Despite the threat and overall shift to change from within the system, over the next decades, prominent scientists continued to speak out against nuclear arms.  Days before his death, Albert Einstein signed the Russell-Einstein Manifesto, highlighting the dangers and leading to the development of the Pugwash Conference on Science and World Affairs, a meeting that brought together scientists and policy leaders.17 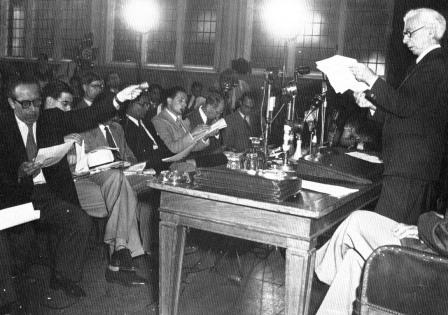 Presentation of the Russell-Einstein Manifesto, from Wikimedia Commons

Throughout the 1960's, 70's, and 80's, nuclear arms and research continued to be the main focus of scientists' political activism.  Organizations like Physicians for Social Responsibility and Scientists Against Nuclear Arms sprang up, and, while not alone in their efforts, were often at the heart of anti-nuclear protests.18

Scientists have joined other political causes here and there over the years.  The AAAS was one of the first major institutions to publicly issue a statement against the Vietnam War in 1965; the anti-war movement also led to the creation of the Union of Concerned Scientists.  Scientists have lobbied for anti-smoking and climate change legislation.  They have protested cuts in research funding.  They have been involved in ethically based political conversations about banning embryonic stem cell research and abortion.  Almost every major scientific organization, including the Society for Neuroscience, the American Geophysical Union, the Federation of Societies for Experimental Biology, and the American Astronomical Society, has a policy or advocacy arm.  The current CEO of the AAAS, Rush Holt, is a former US Representative.

While a lot of scientist involvement in politics has been single issue advocacy or protest, it is clear that there is a robust history of scientists being openly, vocally, and visibly political.  Arguing that marching for science or using a label of "scientist" to get involved in the political sphere is something that isn't done has a host of historical counterfactuals.  Science is political.  Scientists absolutely can be and have been political.  Politics should be more scientific.  While being politically involved may have an impact on the opinions of scientists, there is no evidence suggesting that it harms how scientific research is perceived.19

So go, my scientific friends.  You are free to be as visibly politically involved as your heart desires.  If political involvement isn't for you, that's fine, but don't use bogus arguments to dissuade others from doing so.

In the end, however you chose to express your political and scientific beliefs, follow the words of Pugwash Conference founder Joseph Rotblat from his 1995 Nobel Peace Prize acceptance speech.  "Remember your humanity.  Forget the rest."